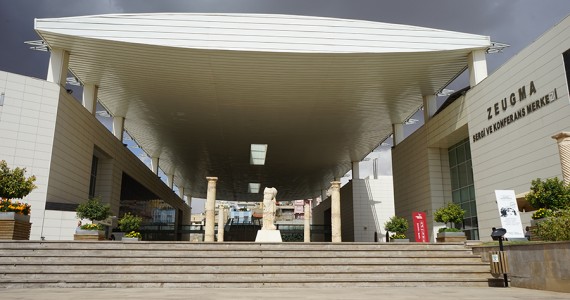 What Does Zeugma Mean?

First, let’s clear up a curious issue. Where does the name Zeugma come from? What is Zeugma?

There is a reason why we call Mesopotamia the cradle of civilizations. This place has been home to civilizations that left their mark on the world, from Ancient Greece to Alexander the Great, from Rome to the Ottoman Empire. A name from the Roman period in Zeugma.

General of Alexander the Great I. SeleukosHe established a settlement on the banks of the Euphrates. Although he gave the region his own name, the name of the city changed when it came under Roman rule. The Romans gave it the name Zeugma, meaning “bridgehead”.

Connected to the greatest trade routes of the period, fed by the banks of the Tigris and Euphrates, fertile Zeugma was one of the four largest cities of the Commagene Kingdom. Many historical artifacts and ruins have survived from Zeugma, which was destroyed by the Sassanids… 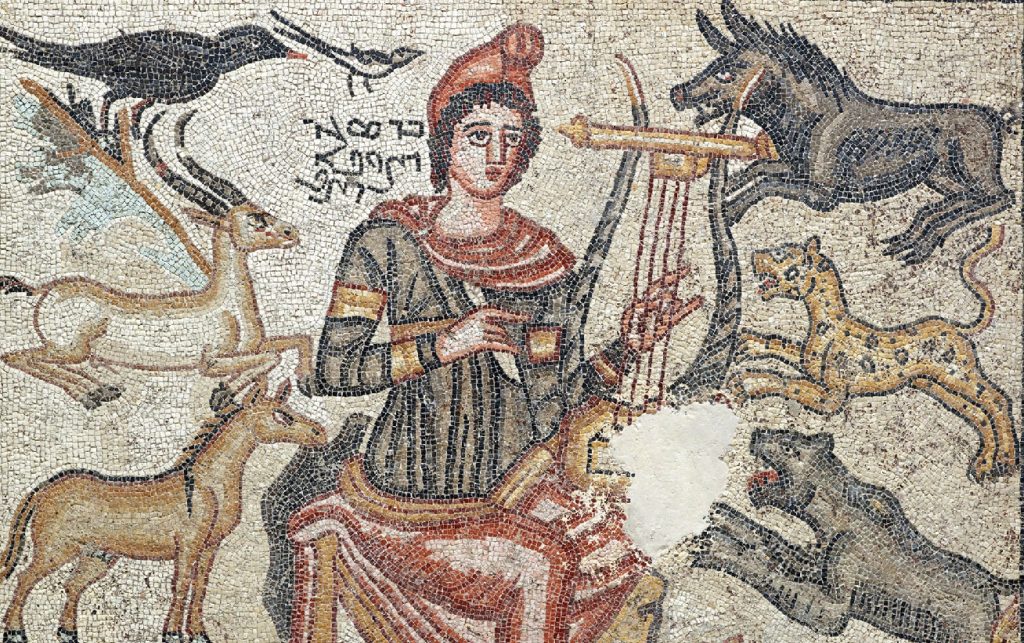 Zeugma comes to mind when it comes to mosaic art in Turkey. Because Zeugma mosaics are among the most valuable works in the world. The use of color in the scenes and figures, the knowledge of anatomy and perspective and the way they are reflected are truly unique!

There are thousands of works that you can see in the museum, we thought we would write the most famous ones. Let the rest be a surprise! 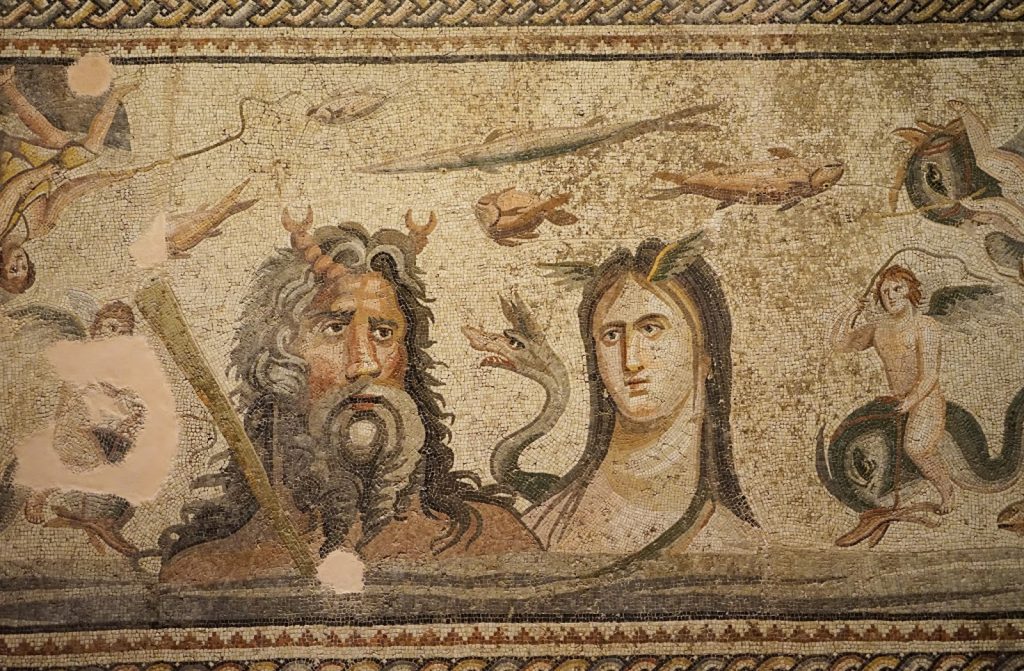 Think about it; Thousands of years ago, a house had a swimming pool with a handmade mosaic painting at the bottom. An amazing luxury! Based on this mosaic and other paintings in the villa, the researchers concluded that the owner of the villa was engaged in maritime and maritime trade. 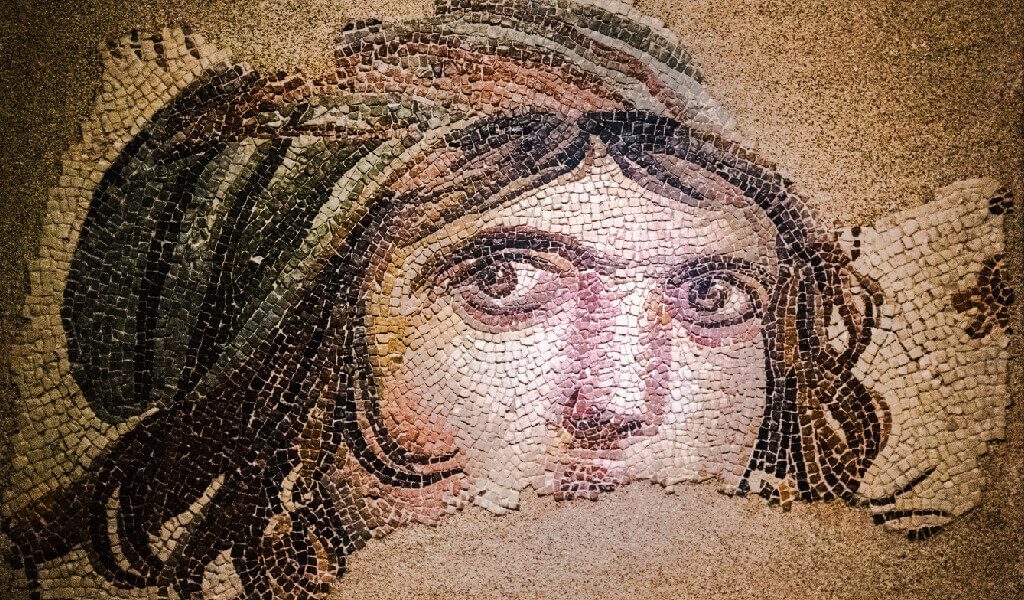 The Gypsy Girl mosaic was discovered in the ancient city of Zeugma during the Zeugma excavations between 1998 and 1999. The mosaic is so impressive that it has become the symbol of both the ancient city and Gaziantep.

Although we call the figure in the mosaic a gypsy girl, the gender of the person is not exactly clear. In this case, it has been a matter of debate. Another controversy regarding the mosaic is that the figure is Gaia, the goddess of the earth and mother of the gods, or Alexander the Great.

The reason why the name of the mosaic is a gypsy girl is that the figure’s fluffy hair is parted in the middle and tied with a scarf around the neck, and there are large hoop earrings intertwined in her ears. The mosaic was primarily exhibited in the Gaziantep Archeology Museum. In addition, it has been exhibited in the Zeugma mosaic museum since 2011.

Planning a trip to Gaziantep? Gaziantep travel guide Be sure to check it out!

One of the most important works of the museum is the Athena Statue, which is a part of the Temple of Athena. The statue of Athena, the goddess and chief protector of the Athenian metropolis, was found in two pieces. The pieces were put together and placed at the entrance of the museum. 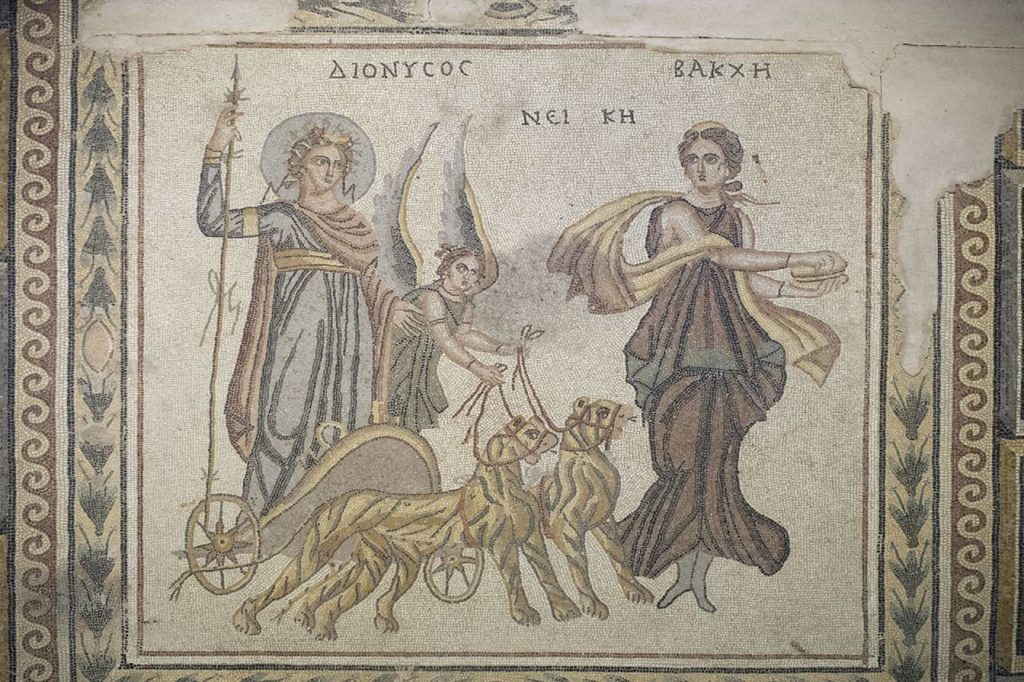 The Importance of Zeugma Mosaics

One of the details that makes Zeugma mosaics so special is that the figures in the paintings are unique. No figures are repeated in the mosaics. In other words, the people who made the mosaics never used a fish figure in another place.

One of the features of Zeugma Mosaics is the color perspective in all fish, human and animal figures. In other words, by using the colors light and dark, the impression is given that the objects are three-dimensional, and it is a sign of great mastery for this period.

The artifacts in the museum are listed according to their location in the Ancient City of Zeugma. There are mosaics from Roman baths on the ground floor. The mosaics discovered in the closest locations to the Euphrates River are at the entrance.

Zeugma Mosaic Museum was opened on September 9, 2011 in Gaziantep. With 1700 square meters of mosaics, it held the title of the world’s largest mosaic museum for 3 years. There is room for every detail of modern life in the museum, which is 30 thousand square meters in total, 25 thousand of which is closed.

There are many mosaics over 2000 years old inside the museum. Parts of the mosaics are missing. Missing parts are completed with the laser system. You can fully experience the splendor of the Roman era in the museum.

The museum consists of three blocks. You can see the mosaic museum, the archaeological museum, and the exhibition and conference areas within three blocks. The museum reminds us of Zeugma again.

Gaziantep’s historical Bey neighborhood Check out our article to discover! 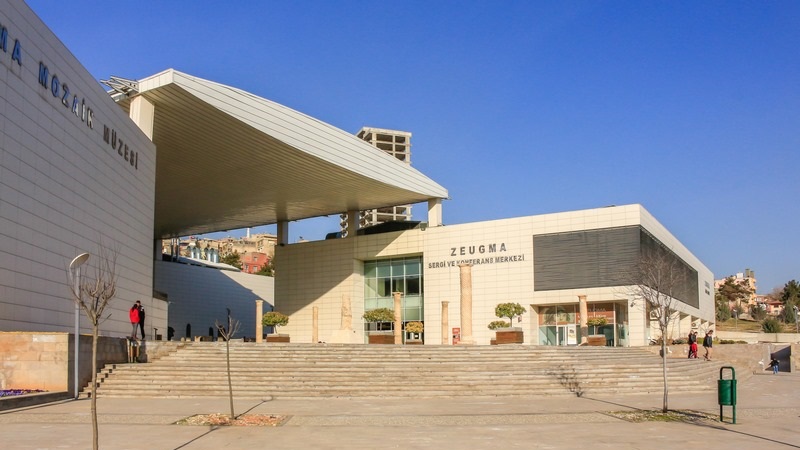 Where is Zeugma Museum?

Zeugma Mosaic Museum is in Gaziantep’s Şehitkamil district. When you go to Hacı Sani Konukoğlu Boulevard via Mithatpaşa, you will see the museum.

How to Go to Zeugma Museum?

Check out Yolcu360 now for your Gaziantep car rental needs. Compare the best prices on rental cars, book your car in less than 1 minute! You can also use the links below to download the Yolcu360 mobile application.

How much is the entrance to the Zeugma Museum?

For Whom Is Zeugma Museum Free?

Museum card holders can enter the museum for free twice a year. We found the information that the museum is free for people under the age of 18, but we could not get a confirmation. If you are considering visiting this place, it would be helpful to get information by phone.

The museum opens every day at 08:30 and closes at 19:00. Zeugma Mosaic Museum opening and closing hours do not change during the summer and winter periods. The ticket office closes at 18:30.

You can virtually tour the museum. Click or tap on the image, then begin your tour.

The ancient city of Zeugma is located on the banks of the Euphrates in Belkıs village of Nizip district of Gaziantep province. In addition, the ancient city is built on a very large land of almost 20 thousand decares.

The story of the city begins in 300 BC. Seleukos I, one of the generals of Alexander the Great, establishes a city on the hills of Gaziantep’s Nizip district and gives it his own name (Seleukeia Euphrates). He also establishes a city opposite this city. He gives the name of this city after his wife: Apama.

They are also building a bridge between the two cities. Later, when the cities came under the protection of the Romans, the name of the region was changed to Zeugma.

Since the city is located in the shallowest part of the Euphrates, it is located in a very strategic region in terms of military and trade. Due to its location, it has been important in every period of history. Approximately 80,000 inhabitants live in the city.

You can enter the ancient city of Zeugma by paying a fee of 10 TL. Museum card holders enter here for free.